The fresh start of a New Year, I just love it! January is always a month for planning and organising for me and at the allotment that is no different! It’s crazy to think that this time last year I was half way through my floristry qualification, unaware of what lay ahead and that I would complete my diploma working from home! This time last year I was also dreaming of an allotment after being years on a waiting list, unaware that one would so soon come into my life just at the right time!! As it will be my first full year on my little plot, I’ll have flowers much sooner this year because I was able to plant bulbs for Spring throughout Autumn and sow seeds from January, so I really am feeling organised and ready to go for this years growing season! 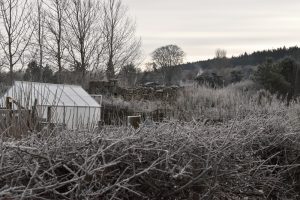 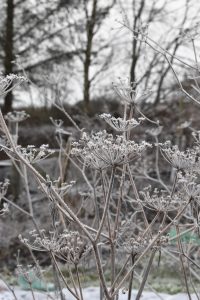 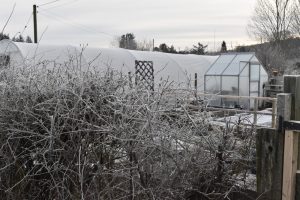 The first job of January was a Dahlia order, as now is the time to order from suppliers. It’s key to get your orders in as soon as they are available to make sure any special variates you have your eye on don’t sell out before you get there! Next up was a big giant seed sort out and a planting plan in writing. It’s important to get organised as early on as possible, so I’ve been making the most of my unexpected January time off (lockdown number whatever) to get on with it! I wrote down a big list including every single item that I’m growing, then ordered any more seeds I felt I needed before organising my seed packets into brown envelopes by planting month! This makes it so much easier when it comes to sowing, as I can just work through my January envelope instead of rummaging through ALL the seed packets each time I come to sow some! I also ordered more seed compost, pots, seed trays and any other things I’m going to need for Spring so that I’m all stocked up and ready to go. 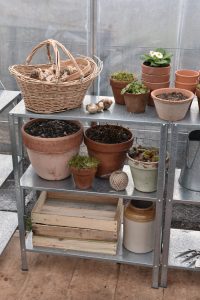 After all the organising it was time to get to the plot, where I soaked and sprouted a second batch of Ranunculus and Anemones. This is a bit of succession growing, to prolong their season as when the Autumn grown ones are finished at the end of Spring, these second batches should still have weeks left in them to take us into Summer! I’m going to try succession sowing too with some of my annual seeds, to really try to make sure I have a steady flow of cut flowers throughout the year. One of the most exciting things for me in January is without doubt the start of the seed sowing for the year! Each seed packet will tell you when you can sow them which is great to keep you right. I started off by sowing some Ornamental Grasses, Eryngium, Lunaria and Strawflower in some beautiful varieties which I cannot wait to see!! These particular varieties can germinate in cooler conditions but I’ve also just ordered a heat mat to give me a head start next month. All my seeds are all sown in my favourite Organic Seed Compost in Haxnicks bamboo seed trays, tucked up under the warmth of the poly tunnel and the greenhouse. 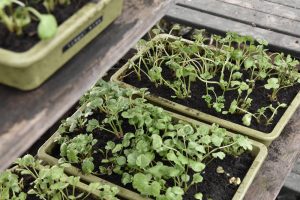 And what a joy It’s been to finally have my salvaged greenhouse complete, and to have been able to keep cosy in it throughout the month as I got on with the seed sowing!! Back in Autumn I picked it up for FREE from a secondhand online marketplace, single handedly dismantling it piece by piece and squeezing it into my little car before getting it to the allotment and putting it together again like a giant jigsaw! Thankfully my husband was home to help with the reassembling, where he even whipped me up a lovely wooden base for it too! I got my shelving from IKEA which fits to perfection, and got some of the covers too which are great for extra protection in the cold! We deep cleaned it bit by bit as we were re assembling it and it cleaned up so well. There were a few missing and broken glass panels which I had to replace, but found an amazing local glass company who cut the panels to size for just a few pounds per sheet which I thought was pretty incredible! All in all the old greenhouse cost very little to get back to full working order, so I’m absolutely delighted to have salvaged it and to have saved a good few hundred pounds by hunting down a free one! I’ve filled my finished greenhouse with all my allotment bits and bobs and it really has completed my wee plot! 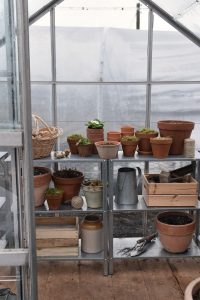 January has been without a doubt the coldest month so far since I’ve had the allotment. There has been a constant hard frost for the whole month which just hasn’t lifted in a way I’ve never seen before and there’s been multiple occasions of snow too! My biennials in the raised beds such as Sweet William’s have been kept extra cosy under some horticultural fleece as it’s been so cold that I’m not sure they would have survived without it! Other than keeping a close eye on them, there’s not much else been going on outside on the plot as we’re all caught up and it’s just been too far too cold to spend any length of time out there! The ground has been frozen solid so I’ve been so busy sowing seeds while keeping cosy in the poly tunnel and the greenhouse, and getting my little stove out to heat up my toes while making pots of tea to keep me going!! 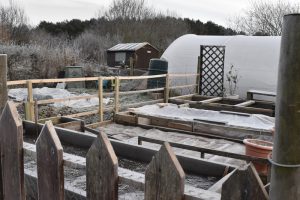 The Autumn sown Ranunculus and Anemones are coming on great in their new planters that we made last month, and are all tucked up in the polytunnel under a much needed layer of horticultural fleece for extra protection. I have planters upon planters of them which is so exciting as they are going to be the first thing to flower this Spring! I have pots of Spring bulbs absolutely everywhere and the first little green shoots are beginning to make an appearance signalling the end of Winter isn’t too far away! I’ve been making the most of the quieter months to get organised for the year ahead, but I am just itching to get out on the plot! February is looking to be another cold month so it will be a good time to test out my new heat mat when it arrives and hopefully by using it I’ll get a little head start with the growing season. You will find me in the greenhouse for the foreseeable! 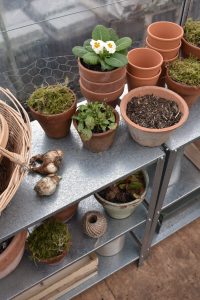 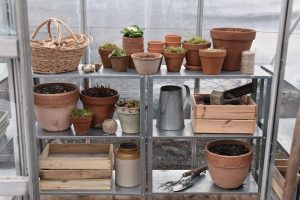 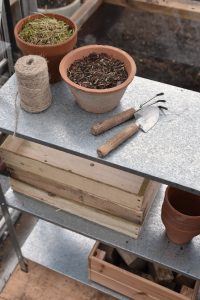