April in the garden, a month when the seed sowing and all the other jobs ramp up, and usually one where Spring really starts to show itself – but not this year!! It’s been the coldest April EVER with frosts well into the minus every single night and even an unwelcome week of snow, the most challenging of months I’ve experienced yet in my allotment and growing journey!! It has been brutal. At the end of March the greenhouse was filled with seed trays that were bursting with happy and healthy seedings, then April came and the aim of the game was just to keep them alive! Every single evening I was out in the greenhouse putting an individual propagator lid on every single seed tray, followed by a layer of horticultural fleece and a wool blanket on top of that, purely out of necessity! Evenings of minus five seen me out with a candle in a terracotta pot at midnight, and days where it snowed and didn’t get above two degrees I was out with buckets of boiling water in an attempt to raise the temps. I’m not joking when I say I don’t think they were ever warm enough to grow a single millimetre the whole of April, but we managed to reach the end of the month with no casualties so I am taking that as a success! 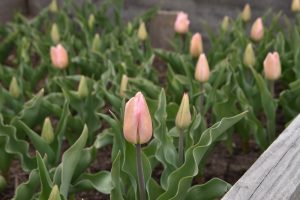 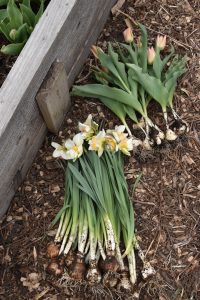 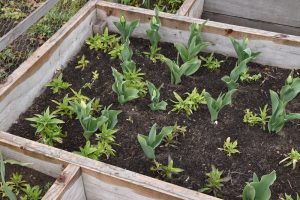 Needless to say the temperatures of the cold April have set us back a good month in terms of growing, but that’s natural, slow growing for you, and that’s ok! We can’t fight nature so we have just got to take it as it comes, which is all part of the adventure really! No two growing years, or even seasons will be the same and this April has been an extreme example of that! It still feels very wintery all around, as the trees are further behind just like the flowers. This time last year my Dahlias were well on their way, and this year I only got them started in the last week of April, so they are a good few weeks away from any sign of life yet but it’s just been too cold in the evenings for them before now. It was a sunny day so I leaped at the chance, soaking the tubers that have been storing all winter out in the sunshine at the allotment before potting them up in the greenhouse at the allotment for them to slowly come out of their slumber. Everything else at the plot has apparently acclimatised by now, and although behind is looking good! The Tulips are pushing on up and the biennials are looking healthy! 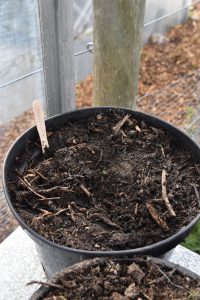 The harvests this April have been wonderful, and have been everything I could have hoped for and more!! The beautiful Tulips have completely outdone themselves, and there are still so many more to come! My successional planting of early, mid and late variates has given me such an even harvest which has worked out so well!! The early variates have had their harvest now, with Apricot Beauty stealing my heart!! They’ve been beautiful in my seasonal bouquets along with the Narcissi which also have been an absolute dream. They have been such showstoppers that I’ve quadrupled the quantity in my order for next year, adding even more new and exciting variates!! The anemones have been slow and steady, and are certainly worth the slow growing wait! Ranunculus have sadly been my least successful Spring flower, and although I tended to those little corms with so much care over winter only a small number of plants were healthy enough to produce flowers, so their quantity is very limited! I don’t know if it was the cold snap that got to them, the fluctuating temps in the polytunnel or something else, but I will try again this Autumn! The spring sown lot are looking a lot healthier and have just been planted in the ground so hopefully will give me a nice little harvest in a couple of weeks! 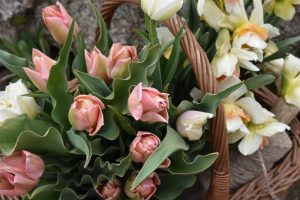 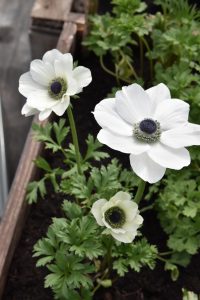 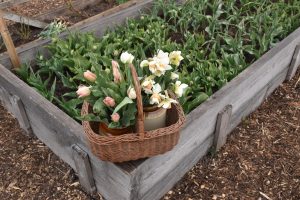 Although there is still the odd warm day it’s still generally cold for this time of year and is certainly still cold at night, but hopefully the harshest frosts are now behind us. The last week in April was a mad catch up of seed sowing, trays upon trays that were planned for much earlier. The greenhouse at the cottage is absolutely bursting and is looking so very productive! I’ve been plotting out and planning where everything will go on the plot, although we are a while away from that yet! 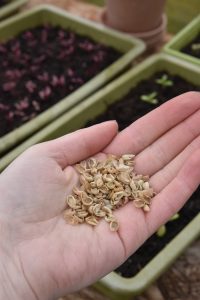 I can’t quite believe it’s May already, and it’s certainly going to be a busy month! We are going to get started on a new area of the allotment which has room for some more raised beds for me which is going to be great for some extra growing space. I have a whole lot of potting on to do soon and hopefully weather permitting, the planting out can start too! The spring bulbs should all be harvested by the time the annuals will be ready to go in their place. It’s hopefully about to get even greener on the plot!! 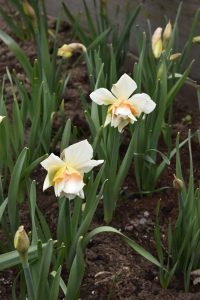 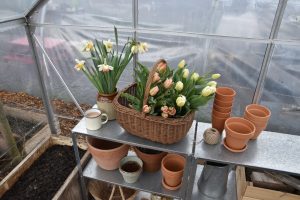