A month in which we had two weeks of knee deep snow and a week of sunshine to finish it off which felt practically tropical, February was a wild one! But first and foremost, we moved!! We sold our house and have escaped to the most beautiful spot in the country, moving into a little rental cottage until we iron out the details and get started on our renovation project – but more on that later! It really feels like we are on a staycation and I wake up every morning, go out into the garden and practically pinch myself that it’s real! And although the house and garden are beautiful, it’s the greenhouse and the growing space that naturally excite me the most!! There was a big empty greenhouse just waiting for me to fill with little seedlings which has been an absolute joy and a huge help to my flower growing! 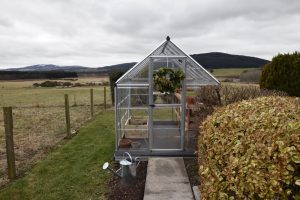 All month I’ve been sowing seeds every single day, some on the warmth of the new heat mat and the more cold tolerant seeds straight into trays in the greenhouse, once the arctic snow storm began to melt away of course! The progress has been excellent, with the heat mat really speeding up the germination process and giving the seeds such a great boost to get them started! It’s still been very cold here through the night so I know they would be a lot slower to germinate, if even at all yet so if you are eager to get sowing and live up in the colder parts of the country, I really can’t recommend getting a little heat mat enough!! I’ve so far germinated various ornamental grasses, Strawflowers, Cosmos, Calendula, Stock, Scabious, Nigella and Snapdragons to name a few and my early spring sown Anemones and Ranunculus are doing great too! 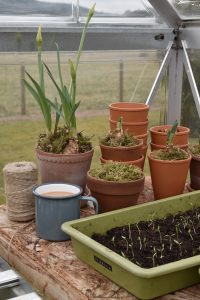 The Autumn sown Ranunculus and Anemones are tucked up in the polytunnel at the allotment and are looking really big and healthy. They are just weeks away from flowering now which is so exciting! I had never overwintered any flowers in that way before, by starting things off in Autumn, sprouting them in trays then potting them on, but they are so far ahead anything else that I’m growing for the year that I’ve learned Autumn sowings are the way to go and I will without a doubt be doing it again going forward!! I just wish I had started even more last year! This month I started off another batch of each for some more staggering in the hope that these later ones will take me right into the Summer. They are just beginning to wake up and will soon catch up with their Autumn started friends! 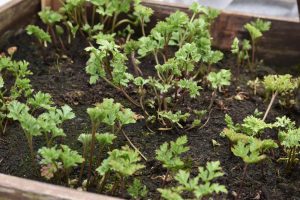 It’s funny to think this time last year I had only just got the allotment, and we were up to our eyes in mud spending every weekend planning it out and building raised beds! In comparison, this year I feel so much further ahead as all of that ground work is done, the beds are ready and I have all the time just to focus on sowing the seeds and growing! The sweet Williams that are planted in one of the beds spent most of February under a frost blanket but seem to be looking ok. The hollyhocks however did not survive the snow and were reduced to a pile of slush! To the compost they went, replaced by perennials that I dug up from our old garden as soon as we sold the house – no harm done! 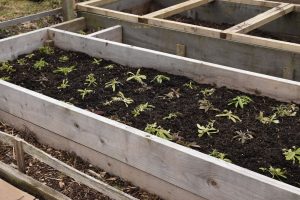 This month it was time to prune the roses, cutting them hard right back and removing any dead stems and leaves for the bonfire – never the compost with roses as they can spread disease! They were only added last summer so were pretty healthy looking, I’m really looking forward to seeing them bloom this summer! I added a new one to the collection too, Rosa Koko Loco which I’m really excited about!! It’s the most beautiful dark blush and is popular amongst florists for it’s superb vase life, so I can’t wait to try it out in my floristry. It came as a bare root rose so I planted it straight in, giving it a good drink to help it settle. Dreaming of those Summer Roses already! 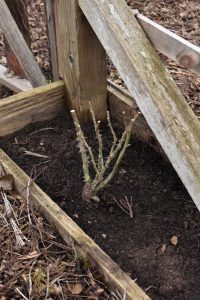 Something else that got me excited this month was compost – beautiful homemade compost!! When I got my allotment last year on my plot was an almost empty compost bin that I immediately started filling up with garden waste and compostable packaging. Apart from giving it the occasional stir, I’ve not done anything else to it and it’s just broken down over the year and turned itself into the most wonderful, healthy delicious (if you’re a plant!) compost!! And best of all, FREE compost!! There are so many benefits to making your own compost I could easily write a whole blog post on the subject alone! But by turning waste into compost you’re creating an amazing, eco friendly cycle creating compost full of organic goodness where you know exactly what’s in it, and are feeding your plants and plot with the freshest goodness you could ever get them!! I filled up my buckets from the compost bin and the sheer JOY of filling up planters for some seedlings with them was unmatched!! 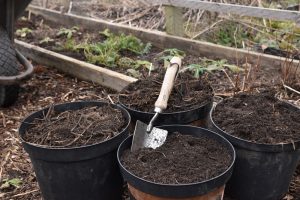 The tulip bed is waking up and as the snow melted away, their little green shoots were peeking through signalling that Spring is well and truly on the way!! The pots are much the same, and with my lack of labelling I’ve got no idea what’s where so their blooming is going to be a lovely Spring surprise! The beds are ready and the plot is looking pretty good and is pretty ready to go for the year!! As soon as we get some more sunshine I’m going to scrub the potting bench to get it ready for the year, and give the gate and fence a lick of paint! We’ve been making some more planters too as the allotment is going to be at maximum capacity, so I’ll be extending my growing space to the cottage garden with a dedicated spot for cut flowers! 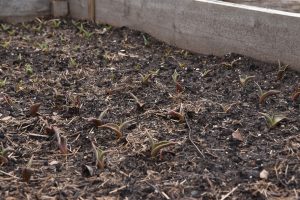 It’s amazing how throughout the cold and supposedly redundant winter months I’ve managed to keep so busy at the allotment, but by putting in the groundwork for the year ahead I really feel I’ve set myself up for a productive and organised growing season and I am feeling more than ready for it! Spring is definitely in the air now and I’m so looking forward to the first Spring flowers, the lighter evenings an the warmer days. I’m going to keep up the seed sowing until I run out of space so that’s really my focus over the next few weeks. It will be time to pot on the first lot before we know it and the blooms will shortly follow! 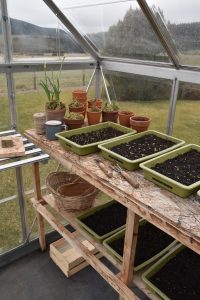 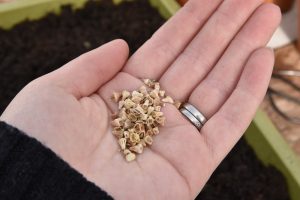 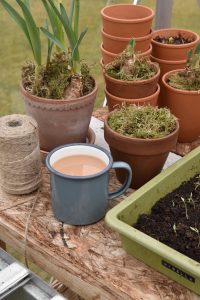